Ola — the first name that usually comes to your mind when you step out for office. This company has become well-renowned for its service and affordability among the Indian household. A journey which started by Bhavesh Aggarwal and Ankit Bhati to provide seamless cab service at an affordable price

Chatbots to become Standard of Service If you ever visited a bank branch in 2000s, you would have surely been familiar with the plethora of standing queues for deposit, withdrawal, pass book entry etc. Going to a branch back then would mean taking a leave from office which tells how 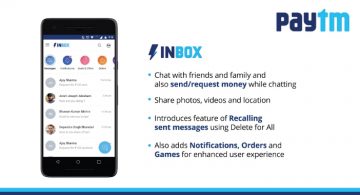 On Thursday, the online payment application announced the launch of their new messaging service called as ‘Inbox’. It’s an in-app based chat service which will provide consumer to chat, send and receive money to their friends and family. This speculation was first out earlier in August this year. With the

You are what you Read! Successful Entrepreneurs are those, who learn from others and adapt what’s good for their business. Right from bootstrapping to your next step in business, you need to know real market conditions and challenges; how to overcome them and make it big? Business Books are sure

Modi gets it modified! ‘Startup’ definition in India gets few changes.They were done to promote entrepreneurship under ‘Startup India’ and for also making it easy for business ventures to avail incentives. Earlier only tech companies or companies with innovation and intellectual property were considered a ‘startup’ by DIPP (Department of

People’s Community to Develop Business Ideas Cloud-based domain service provider, GoDaddy, just launched a new app called Flare. It is being pegged as the Tinderfor entrepreneurs. It is an app where people can come and discuss their ideas, and get feedback from other entrepreneurs and members in real time. Insights

Whose Benefitting At All? A couple of days ago, we wrote about how Modi’s Startup India campaign has nothing to show for even after nearly 2 years of its announcement. Now comes a curious case about Assam’s state-run Oil India Ltd. The company has announced a Rs. 50-crore fund to

Startup India, Standup India! Located in Kothur Mandal, Hyderabad, Symbiosis Institute of Business Management (SIBM-H) has announced the launch of an Incubation Zone for startups. To give you a brief idea, Symbiosis is a family of 44 academic institutions, imparting quality education for over 40 years. It is host to

As per a report by NASSCOM and Zinnov, India is one amongst the five largest startup communities in the world with the number of startups crossing 4,200, a growth of 40 percent, by the end of 2015. The maturing Indian startup ecosystem is contributing to the Indian economy in a