There is lot being said and written about bitcoin & cryptocurrency altogether. Still, there is lot of misunderstanding among people over it, that’s when we thought how about we try to solve this mystery. After our last article on India’s probable ban on cryptocurrency, it got our writers curious to

Indian Startups Flashes A Hint Of Inspiration From Western Countries

Let your venture not be mere innovative rather inspirational as well ! You can get inspired by anything and everything that is present around you. It’s not only an artist who gets inspired by his surroundings, also it’s essential for a businessman to get inspired by something in order to

Reaching the next level! As said by the ever popular personality Arun Jaitley, Union Minister of Finance and Corporate Affairs, “Entrepreneurs need freedom from the state.” TV Reality Show “The Vault” could truly be the next big thing the country needs. With the growing attention that the startups around the

As per a report by NASSCOM and Zinnov, India is one amongst the five largest startup communities in the world with the number of startups crossing 4,200, a growth of 40 percent, by the end of 2015. The maturing Indian startup ecosystem is contributing to the Indian economy in a

The world is still struggling to find a cure for cancer, a disease taking a death toll of millions every year. There are almost about, 400-500 companies around the world,struggling to find a panacea. Recent developments have witnessed the launch of about 70 drugs treating 20 types of tumours. According

Why Indian Startups Are More Service Oriented Than Product Oriented?

Thanks to technology and the Internet, new startups are getting more disruptive by the day, making the business space more exciting. India is among the top three global startup ecosystems. However, there is a clear pattern; Indian startups are almost exclusively service sector oriented while production/manufacturing sector has been ignored

Remember the wandering ‘kabaadiwala’ who would buy old newspapers, empty bottles and other junk in return for some cash? While it was not a lot of money, but you did get the additional satisfaction of recycling some of the house waste and thus helping the environment in the long run. 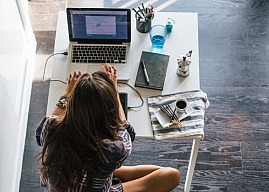